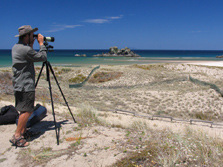 The Dotterels have started nesting but have already lost their first nests due to high tides and storm swell. Being determined little characters they have replaced their nests and will hopefully have a chance at hatching this summer’s chicks.

Nicki Miller is our DoC Dotterel Ranger this year, she will be in the village once or twice a week to keep an eye on all the nesting birds on the Wharekawa Spit and at the Ohui end of the beach. Due to the ongoing restructuring at DoC we will not have the benefit of a full-time ranger this year so it is up to our community to watch the nesting areas and stay in touch with Nicki if we have any concerns. Her mobile number is 027 660 2496.

The nesting birds on the Wharekawa Spit are most vulnerable to disturbance at low tide. This is precious feeding time for fledgling chicks and their parents and we will need our usual team of Dotterel Watch volunteers to protect them from human and dog disturbance an hour each side of low tide. There will be a roster posted on the bus stop notice board, please try to help out if you can. (It’s actually a nice quiet escape from a busy bach full of visitors!)

To further protect the nesting birds please help us keep dogs away from the Spit and Ohui areas, signage at the carpark shows exactly the area of mid-beach that dogs are allowed under control before 9am and after 7pm, this is in force between December 15 and February 8. TCDC bylaws state clearly that between the Saturday of Labour Weekend and 1 March dogs are banned at the Wharekawa and Ohui ends of Opoutere beach, check the maps in the carpark for the exact areas. As has previously been noted in these pages the local Animal Control Officers, Tania and Tim, are taking a particular interest in Opoutere this summer. To talk to the Animal Control team call 07 868 0200 and you will be put through to them.

← Summer Has Arrived!
NZ Conservation Is Showcased In The New Yorker →